In the whole of Cameroon, one in four teenage girls becomes pregnant – in Switzerland, only 0.8 percent of mothers are less than 20 years old. This is mainly due to lack of education and the lack of contraceptives.

A 12-year-old girl comes with her mother to the Medical Center in Békoko. Your symptoms: Nausea, dizziness, fatigue. At the mother’s request, a pregnancy test is carried out, among other things, because she already has her suspicions. In fact, after some time comes back a positive result – the girl is pregnant.

“When we told her the diagnosis, she was shocked and scared,” Dr. Armand Djimafo reports. “I sat in front of her and wondered, ‘How do you tell a 12-year-old girl that her body is going to change? That the likelihood of a C-section is high because her body is not ready for birth? And that her risk of complications during birth will be much higher?”

“Not at all, actually,” Armand notes. “You shouldn’t have to tell a 12-year-old girl something like that.” In Cameroon, however, this is unfortunately the reality. 24 percent of teenage girls become pregnant – the highest rate in all of Central Africa. “In rural areas, the rate is 32 percent; in urban areas, it’s slightly less at 17 percent,” Armand said. Most girls are not 12 years old, but pregnancies among 15- or 16-year-olds are a regular occurrence.

How can it be explained that in rural areas of Cameroon about one in three adolescent girls becomes pregnant? “Young people in Cameroon have their first sexual experiences at a very early age,” Armand explains. A study confirms that sexual relationships with multiple partners are common among adolescent girls in Cameroon. Armand tries to explain: On the one hand, there are financial incentives. “Poor families receive money from their daughters’ boyfriends. Especially if there is a child in common.” Another problem is the lack of education in rural areas, he said. “The children and young people there generally have less access to schools. That’s where sex education often falls short.” The aforementioned study showed that young people’s knowledge of sexuality is low and comes mainly from their peers. Finally, the necessary contraceptives are often simply not available – making it difficult to avoid pregnancy.

Hope and Life Cameroun has long been aware of these problems. Therefore, for awareness purposes, the NGO conducted a campaign in February 2021. “Students from Babenga, Bekoko and Bwadibo high schools participated,” Armand said. These are rural areas, which is exactly the target group.
During four days, these teenagers could not only attend workshops on prevention and consequences of pregnancy, but also undergo blood group and malaria testing. Finally, a competition was held in which students competed against each other and answered various questions on the prevention of pregnancy or sexually transmitted diseases. 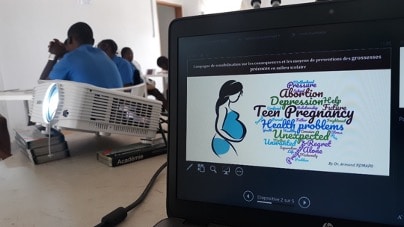 The first campaign is now to be followed by others.

“We were able to educate 82 students,” Armand concludes. “All the students and teachers were happy with the program and wanted more campaigns of this kind.” Hope and Life Cameroun is therefore planning to launch another similar campaign next February.

Expansion of the Medical Center

And what if pregnancy does occur? “Then we have to make sure at the medical center that this goes as smoothly as possible,” Armand says. “There are increased risks with teenage pregnancies.” In addition, the pregnancies are never reported because of shame on the part of the girl or her parents. But the care of adult pregnant women is also difficult. “Many women get little or no check-ups because they have no access to medical care.” The rate of maternal mortality in Cameroon is one of the highest in the world: around 600 women out of every 100,000 die during pregnancy or even childbirth. Because there is a severe lack of support there as well. “There are few facilities that offer C-sections or other types of obstetrics. And these are too far away for most women.” 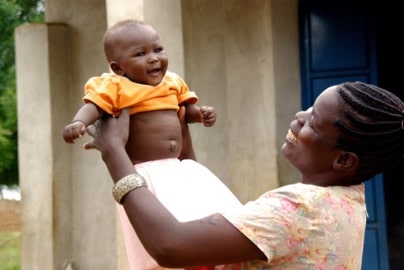 Being pregnant – whether as a teenager or as an adult – is therefore life-threatening in Cameroon. In order to enable at least the women in the Bekoko area to have a healthier pregnancy and birth, KamerunGO! and Hope and Life Cameroun would like to expand the health centre. “A small women’s clinic with an operating room is planned, where caesarean sections or other small operations will be performed in the future,” describes Ursina Sprenger, President of KamerunGO! In the meantime, we are making efforts to educate and counsel women in the already existing health center and also to further train the local health staff.”

Thank you for your support!

Our partner in Cameroon